I spent part of yesterday and today working on the shield effects for Gratuitous Space Battles. The old effect was shit, but it was only placeholder. It was just a simple alpha blended sprite that draws over the ship, fading in and out as the ships hit like this: 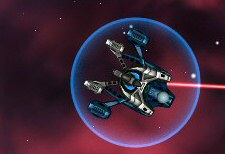 There was a lot wrong with it. firstly lasers seemed to shine through it, secondly there was no feeling that the ship got hit from a certain angle, and there was generally not much pizzaz. The newer version is better but still needs work: 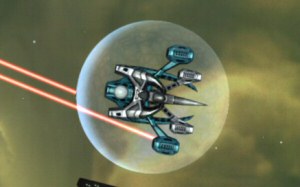 Now I have the incoming laser fire stopped at the right place, plus the shield itself has 2 layers, a feint all over effect, and an angled blast front image which faces the point of impact. I think it looks lots better. What I don’t have yet is any sparks or particles rippling out from the impact point. A simple particle shower is easy, but ideally the particles would ripple around the shield in a realistic spherical sense. I’m not sure how easily doable that si without doing it all in 3D, which is overkill.

Right now I’m working on spaceship breakups on explosions so I’m taking a break from the shields stuff.