GDC, after you have been a few years, certainly is a big change from normal indie day-do-day development. From being someone sat in a room mostly alone, mostly just typing, you end up in conversation pretty much all the time.  I chatted to developers on the plane, on the BART train from the airport to my hotel, and then all through the day and evening. Its more than a bit tiring.

My GDC adventure started with high stress. Having teased a fellow dev mercilessly about him ‘worrying about nothing’ that it *might* snow a bit the day he left, I woke up at 7AM to discover this: 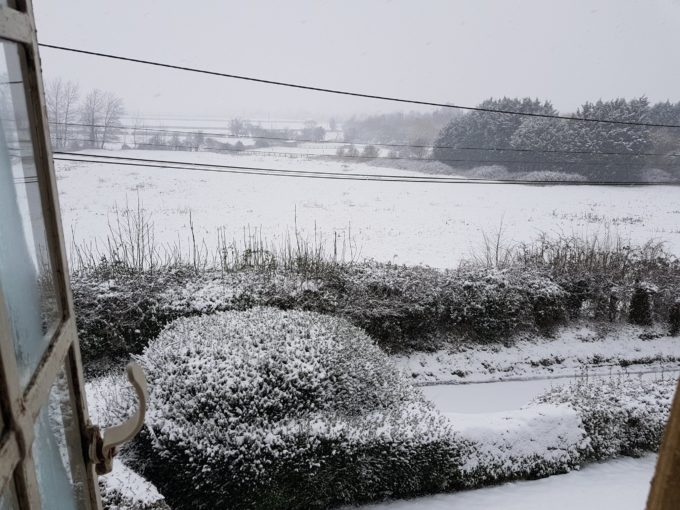 at 7AM, where I live, the roads are unused, let alone not gritted. I basically half drove half slide and skidded the first 20 miles, getting out to help push stuck cars in heavy snow, and keeping one eye on the wrecked cars and vans that littered the roadside on the way to the airport. Its a small miracle I got to the airport both in time for my flight, and with no dents in my car.

I flew virgin, rather than British Airways. Their in-flight-entertainment and seats kinda sucked, but the layout was good. I think BA wins overall. I did not sleep at all, whereas I sometimes do with BA.

I’m staying right in the very heart of San Francisco, asked for a ‘quiet’ room rather than one that lets you hear the vintage trolleybus bells from the street. They are cool and touristy the first time, but no the eighth. The weather here is best described as ‘meh’, but at least I don’t need a scarf, hat and gloves like the UK: 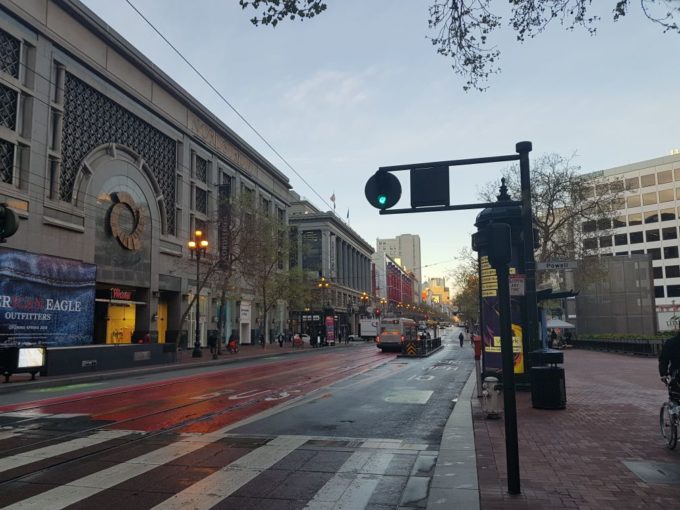 Day 1 (Sunday) is basically just saying hello to fellow devs and putting off sleep. I order some ‘chips’ in a bar for $8 and get given crisps. Fuck that.

Monday is GDC proper, and likely the day where I am most likely to attend the actual show. I attended 2 talks, of the maybe 5% of the show that my cheapo indie-pass gives me access to. They were good, interesting talks, but if they were PWYW would I have paid $50 each for them? Nope. I need to stop wasting money on a pass…

If you do enough social media, even hiding your GDC pass makes you someone who will get recognized a lot, so there is a lot of admitting I am me, shaking hands and saying hello. I finally have got over the shock of realizing just *how many* game devs there are in the world. I long ago gave up on Tea in California, and am resigned to spending money in Starbucks on coffee all the time. Their monopoly position here makes steam look like amateurs.

The evening is nice, drinks with a bunch of devs, talking about identity politics, movies and TBH anything but games, then a quick hello at an indie meal, followed by a proper sit down meal and trading war stories and old-man stories with a bunch of industry veterans. Eventually, its time to uber to a party so loud I wonder what the point is. As always, everyone holds their events at the same place every year. Anything over polite restaurant volume makes an event pointless for me, and I need sleep anyway. I could uber back…but I know SF now, and I hit my 10k steps on the way back to my hotel.

US hotels provision of coffee machines is abysmal, so I have to physically leave my hotel and go to Starbucks to get a reasonably priced hot drink. Madness. I don’t need a TV in my room, I just need a fridge with milk in it and a coffee machine. Why is this so fucking hard? 10k steps means I can justify a donut, something I never eat back home. If I judge it just right, I wont actually put on any weight :D.

Jet lag is still my constant companion, waking at 6AM the next morning. Again…no hot beverage, I must leave the hotel room to fetch one like some sort of feral indie beast. Arggghh,