With any luck, this Production Line build will be the one that goes into Early Access next week on steam (hopefully GoG too). This is partly because doing so requires some admin, setting a build live on steam and having it approved by valve. After that we will be back to a regular update schedule :D

Here are the highlights in this new build for those of you already used to the game:

This is in the bottom right of the screen and notifies you when autosave has happened (instead of fullscreen), when the AI has researched something and when new loans are available. it will eventually also get more use for world events.

A new researchable stage coming after dry finish, and allowing you to provide a higher quality paint finish for your car, complete with groovy new slot. 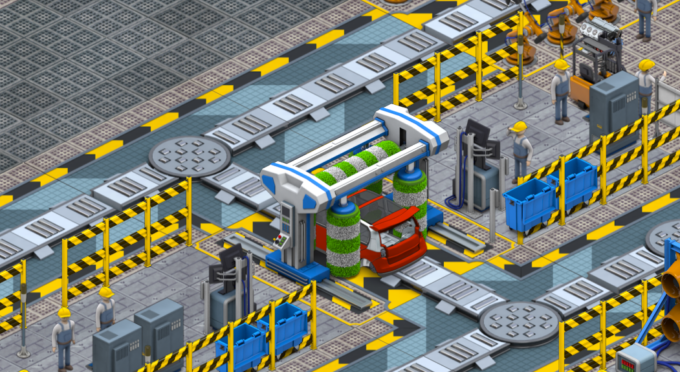 Balance changes to the AI research algorithm, and a number of bug fixes.

Too many things to list here, but a lot of minor bugs have been fixed, some visual, some gameplay related. This is not a bug-free build, but its better than its ever been. A number of long standing graphical anomalies finally got squashed this time.

Eventually these will be not just visual, but will have an impact on sales through different markets and demands being modelled for each body style. For now its just another cool car design. This one has less doors, so uses less door panels :D That means that if door-panel is your bottleneck, switching production to this style (or interleaving it with sedan or SUV) may be a wise move. 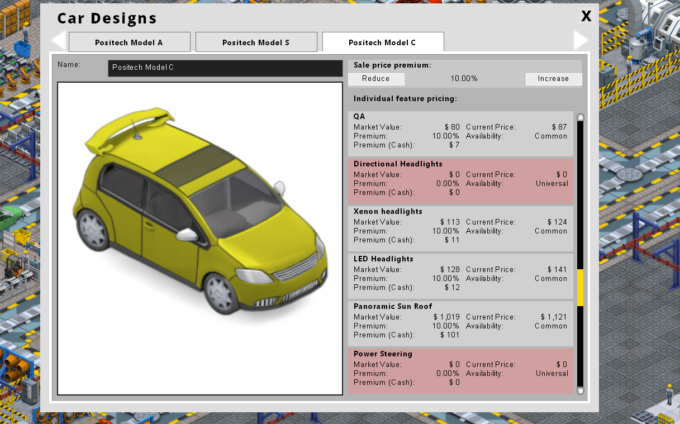 Since initial release the GUI has been entirely coder art (and it sucks!) I have a professional GUI design now, but its going to take a while to fully implement it. This build changes the R&D screen (a bit), the slot picker, and the finance summary, and a portion of the slot details window. Over the next few builds more of the ‘pro’ GUI will go in. It needs feedback from you to make it really good, so don’t be shy! 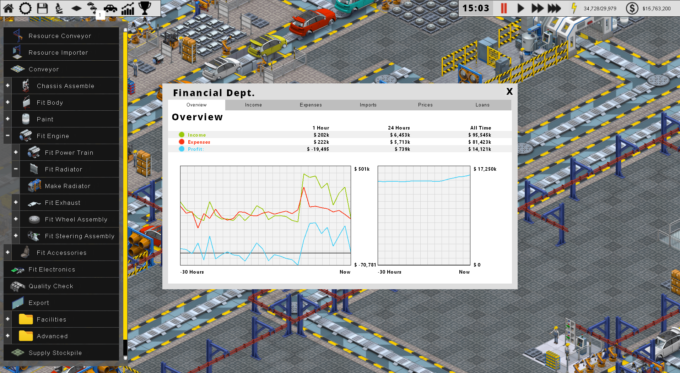 And you can add it to your steam wishlist using the link below.

GUI design is a strange thing. its something I’ve always actually spent proper money on in the past, hiring a good GUI designer to overcome my sheer incompetence. The interesting thing is…alpha players of Production Line do not seem to care:

(Thats the last poll I included GUI in) Of course, you have to take this with a grain of salt as these are people who *already bought the game*, so clearly the appearance of the game in videos and screenshots did not put them off. They may be thought of as less-aesthetically sensitive players, and that’s fine and I have just under 10,000 of them now. Yay. You may assume that there are a lot more aesthetically-sensitive players out there who ignore my videos and ads and screenshots because they think the coder art implies an amateurish or low quality game. Somewhere between the two lies sanity.

With this in mind, and the games release on Steam early access (and GoG) next week, I have been doing the first few bits of applying the proper pro-artwork design to the game. So far its just color changes and font / layout changes. You can see the current state of the task picker and finance screen here: (click to enlarge) 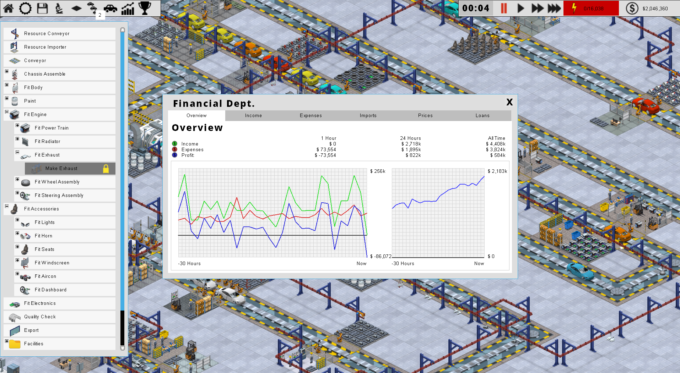 And here is the new one for version 1.18 (that will be out probably tomorrow and will doubler up as the early-access build). (click to enlarge)

This is not final, and obviously things are a bit messy right now as it looks like I cannot decide between white and black, but eventually there will be a bit more black, and things will hopefully fit toigether better. That top bar will be totally re-implemented with new icons and styling.

This stuff is MUCH HARDER than it looks, because we have to design for a)hardcore players b)casual players and c)2560×1440 res players and d)1280×768 players. That means a lot of artistic compromise and of course no design is going to please everybody. One of the downsides to Early Access is people do get used to an early version, and if for example you prefer the lighter design, then you are going to be disappointed that it changed. Maybe in the long run I will be able to support GUI mods. In the short run, I expect forum/facebook/reddit/twitter arguments about which looks best. Thats early access I guess!

BTW you can now add Production Line to your wishlist on steam:

Things look on target to sort out 1.18 tomorrow. In unrelated news I may have some Democracy 3 updates heading over soon too.

More GUI fun to come later, but there is plenty of other cool new stuff to talk about…

Its official! We now have a teaser trailer for Production Line:

Also…We are planning on releasing to steam Early Access on 18th may, at $15.99. We will be releasing the EA build to our alpha customers soon, probably a few days before that, and adjusting the price up to match. The new build will have a new car model 9compoact) and some other cool stuff :D. This means that I have got all my steam keys set aside for the pre-order customers (yay!) and also means I can embed cool widgets like this:

Which is all jolly exciting :D

From a business POV, it means that I start to find out how many people who want the game have been putting off trying it until its EA release (no matter how many times I mention it, people don’t seem to believe they get a steam, key when it comes to EA…) Hopefully this means a tidy jump in sales, but as it’s already got >9,000 pre-order players, I’m feeling quietly confident it will do ok in Early Access.

Of course this also means I need to get off my backside and send out some press emails to announce its EA release, and that then opens the floodgates to all the spammers and scammers with their popular youtube channels of 6 viewers, or the many claiming to be the likes of pewdiepie, who mysteriously cannot afford a $15.99 game… Ho hum. Part of modern game release process I guess…

This also signifies that I think the game is ‘good enough’ at its current state to be considered an Early Access title. Feedback has been really good and people assure me it was already good enough on day one, but I’d like to surpass peoples expectations rather than just live up to them.

Releasing to EA will no doubt swallow up a lot of time dealing with new tech support questions and how to play questions etc, which may slow the pace of new features and bug fixes slightly, but hopefully not too badly. I already have the compact car body done, tested and in the game ready for the next patch, so I’m kind of ahead-of-myself. Plus its pretty close to ‘GUI refresh’ time, so there is lots of cool stuff coming.

The next two weeks will be nerve-wracking no doubt. I just hope the game gets picked up by some games press and gets some twitter/reddit/facebook love.

In the meantime you can still grab a copy using the humble widget:

Inefficiency really annoys me. I see inefficiency almost everywhere I look. I guess as a coder, I am on the lookout for it, as it makes the product I sell worse, but that has hugely spilled over into my observations of life in general. It seems that inefficiency is accepted, tolerated, in some cases even encouraged by almost everybody around me.

In the UK, members of the house of parliament can only vote if they are inside the walls of the palace of Westminster. To do so, they have to all walk out of a special room, then walk back into it through one of two doors, while people in stockings and buckled shoes count them. I am not kidding. Its 2017 and we are talking about sending people to Mars and strong AI, but our country is run by people who think walking through a door in a queue is the best way to record decisions. We defend this gross inefficiency as ‘tradition’.

If I want to send a payment to another country in another currency, my bank either wants a phone call, a fax, or a physical letter. Why does the fax machine even exist? Its like amazon sending you your orders by canal barge. Its 2017. Lets kill the fax machine stone dead. it should not exist, in any form, under any circumstances.

To charge my car at a non-tesla point I have to use the QR code reader on my phone, enter the last 3 digits of my credit card number, please 3 or 4 confirm buttons, and THEN plug my car in. Did I mention its 2017? 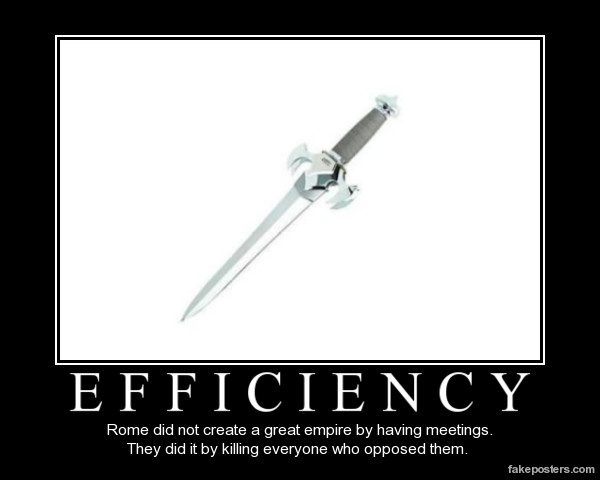 I am not a superhero with fast reactions (although to be fair I did once beat a ‘professional cowboy’ in a speed-draw gunfight) yet I can open a new browser tab to googles homepage and start typing my query before that tab is rendered and the search box has focus. How is this possible? My Blu-ray player takes actual seconds to power-on to the state where it can eject a disk. Actual seconds.

The vast majority of traffic lights in the UK and dumb systems that are not traffic aware, and not able to adjust to changes in traffic flow. Right now tens of thousands of citizens are sat at a traffic light that is red for NO reason. The same inefficiency is pervasive throughout all common goods and utilities. We have ‘peak’ times on trains and buses and roads because we all decide to work at the same time, and everyone drives to work with 3 empty seats in their car, and nothing in the luggage compartment.

I reckon on average, a UK citizen is ‘efficient’ in what they are trying to accomplish whilst awake maybe 20% of the time. 80% of our time is literally wasted, thrown away. We queue to buy food, we queue to speak to the bank, we receive telephone calls and post instead of email. We sit in traffic. Even people sat at a desk all day theoretically doing productive work are incredibly inefficient. How many people know to use CTRL+C, CTRL+V, WIN+F, CTRL+HOME, ALT+TAB and the thousands of other productivity tips? How many people who need multiple monitors don’t have them? or don’t know how to use WIN+UP/DOWN/LEFT/RIGHT to organize their work?

How efficient are you?

And expand this out to the whole world. How much time is wasted with millions of people fetching fresh water by hand because we haven’t installed piped water to their homes? How much time is wasted because people have not got the education to grow their crops efficiently, to do their work efficiently? How many people are still using 1970s technology in their day-to-day lives. Imagine a world where we all operated with efficiency all the time. No wonder the vulcans beat us to lightspeed.