Ok here is some *good* news. And its about Africa, but no, not Democracy 3, it’s about that school Positech is funding in Cameroon. I just got an email from the charity handling it, and more details are to come soon, but the school is 95% finished, they have had an opening ceremony, it was in the local paper, on radio even on local TV. I’m looking forward to seeing snippets of all that soon, but in the meantime, I have two pictures that have been sent from the agonizingly slow internet connection in Cameroon. First, here are the children about to sing the national anthem in front of the old school… (old school at back on the right)… 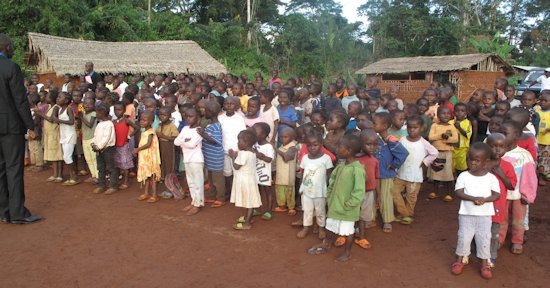 And here is the representative of the charity being photographed in front of the shiny shiny new modern school, that we funded. Yay :D 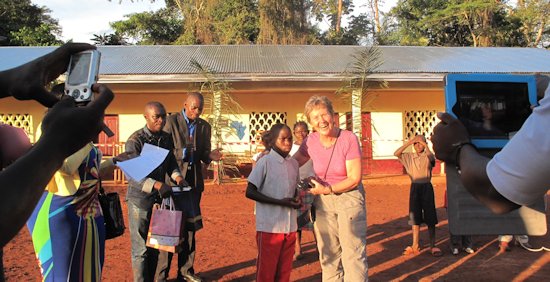 This is so awesome. My first response when seeing the pics was, wow, thats a lot of children, but when you think it has 3 classrooms, I guess thats probably right, they don’t have tiny class sizes out there anyway, so its to be expected, but its still kind of amazing to think you can boost the education of so many people when you are just some middle aged dude typing in his home-office. It’s not like I had to put on a benefit concert or spend years knocking on doors. And the new school looks BIG and really cool.

I can totally understand why people who do stuff like this want to fly out there and strut about in the school. Its 100% natural. I would love to see it, love to actually be there, and be able to understand in that basic primitive way that I have really helped to do this, by touching the walls and seeing the children in lessons. That temptation is huge, but I fight it because 1) I try not to fly too much and 2) shouldn’t that potential air-fare money go to better use?

Maybe one day I’ll give in and do it anyway :D

Expect another post when I have video and more photos! For those curious about this click the ‘schools’ category on this blog post to see earlier posts about the school, where it is, what it cost etc.

Even in November 2015, PC games are not commodities.

…although people seem to be pricing them like they are. Which is kinda weird. I’ve seen games listed for $0.10. Thats kinda…desperate, and its either a signal that the game is an absolute botched together clone of something simple and generic, or it shows that the developer isn’t aware that games are not commodities.

About a week ago, Anno 2205 came out, and I bought it right away (in fact I even pre-ordered it, based on my like for 2070). The price of the game is interesting. here is steam spy… 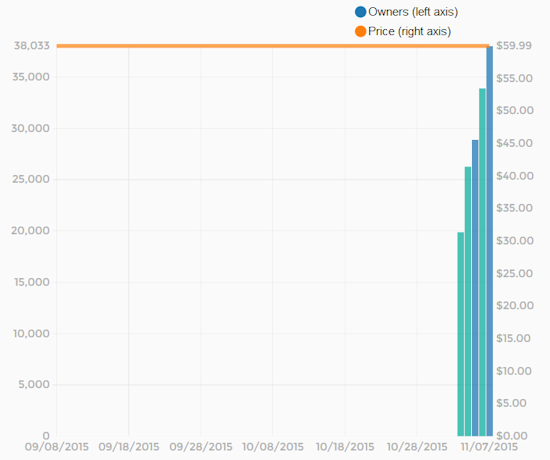 So…no launch discount, a price of $60.00, and so far about 40,000 owners (clearly more off-steam as well). So thats $2.4 million, so take 70% and it means 1.68 million. IO don’t know the games dev costs but I’m guessing its not stratospheric. A few million? hard to tell, but I think its safe to say the game will be a decent retrun on investment.

Ubisoft know that Anno is Anno, and other games are not Anno. If I look at the strategy new releases chart on steam… 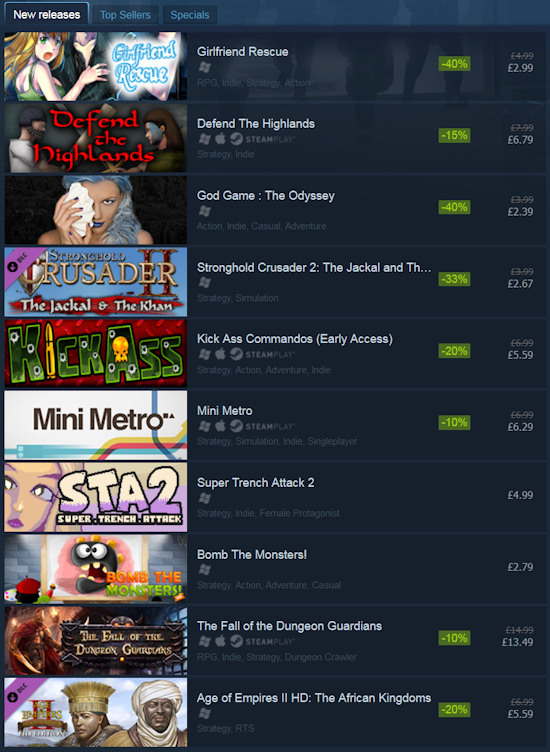 Ok, so no denying age of empires is cool, but a bit…old, and mini metro might be fun. One of them is DLC and I’ve never heard of the others. This isn’t my point though, my point is, I could buy the entire newly released top ten strategy games for less than the price I paid for Anno, and yet…I bought Anno. Judging my sales charts, so did everyone else.

Stop pricing games like you are selling a generic commodity. You aren’t.

Its announcement day! Yay. And what do we have for you today…

Yup its Democracy 3:Africa announcement day! So whats all this then?

Democracy 3: Africa is a sort of ‘re-imagining’ of the original game, and also an ‘expandalone’, meaning you don’t need to buy the original game. This is not DLC, but a stand-alone game with new graphics, new music, and of course a completely new setting. The countries in D3:A have a different set of problems, opportunities and characteristics to those in the original game. That has meant a lot of changes and a lot of tweaking and re-modeling. There is more information, including a list of the countries modeled at the placeholder website here.

So in more blog-like terms…whats going on here then?
Democracy 3 is a pretty popular game, and actually, while I’m mentioning it, you can get it at 66% off RIGHT NOW on steam. Anyway…over the years it’s had 3 expansions, (Social Engineering, Extremism and  clones & Drones), and recently we revisited the game to tweak it with some GUI improvements and new achievements.  Because of its popularity, I’m able to ‘take a risk’ and make a version of the game that at first glance might not make commercial sense. When I told some friends about it they said, ‘why Africa? who is interested in African politics?’

And thats kind of the point. In the west, we tend to think of Africa as either the target of charity fund-raising concerts, or somewhere to go on a safari. We never think about the African economies, or African industry or exports. Lets not forget Africa is home to a billion people…

The problems, opportunities and characteristics of many African countries make for a fascinating experiment in political strategy. It also makes for perhaps more of a challenge. Some people claim that the USA is ‘hard mode’ for Democracy 3, but even in the USA, you aren’t dealing with the levels of corruption found in *some* African states. Poor infrastructure and low levels of literacy are not much of a problem in the west, but they are definite factors in Africa. The problems are different, making for different strategy, and hopefully, a very different and interesting gaming experience. 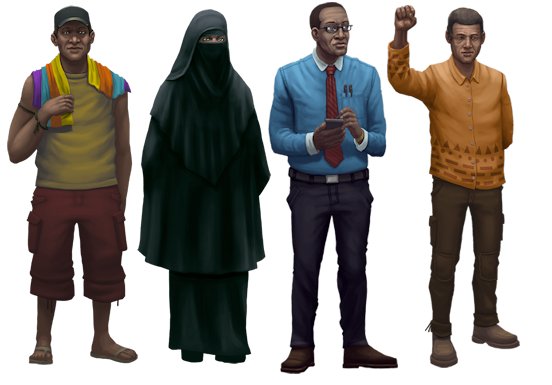 Plus… When do you ever see Africa in a video game? I have no memories of it ever being anything but a destination where pirate bases or criminal gangs roam. Gaming seems to have a very distorted view of Africa, just like Hollywood does. I am under no illusions that this game will sell many copies in Africa, the gaming market is tiny, but I think it still makes sense because its such an interesting setting for a strategy game.

Also… I am not the designer this time. Modeling Africa was my idea, but in terms of all of the research, balancing, re-modeling, tweaking and any re-coding, this is all being done by Jeff Sheen from Stargazy Studios. Look at me! I’m expanding (a bit).

So there you go…Democracy 3:Africa. And yes…I am going to get even more white supremacist spam. (I got a bit after announcing the school we are building), and yes, we will probably get the tone of some of this wrong, and people will accuse us of misrepresenting African countries and people, and we expect to learn a lot, and to be in full-on listening mode. We are two white guys in the UK making a game about Africa. I’ve never even been there. I get that. I know we will make mistakes, but they won’t be intentional. If we have any ‘agenda’ here at all, its just to develop a game with an unusual and interesting setting, and to learn a little about Africa in the process.

Oh and shipping date? Errr. not sure. Q1 2016? We have been working on it secretly for a while…

So don’t forget…Democracy 3 is 66% off this week on steam :D