The Truth behind some of the Democracy 3 Achievements…

As you may know we recently updated Democracy 3 to include 12 new achievements. Here is some information on some of them, for people getting stuck…

So how are you getting on? finding the new achievements a bit tough? :D You can grab a copy of democracy 3 from the links below…

Tech Companies: Hire some staff. And train them…

Tech companies drive me bananas. IO deal with lots of them, as a developer. I won’t list the ones I’m talking about, but we all know the names of the big ones. Most (not all) of them seem incredibly incompetent when dealing with small business partners, and of course…customers.

More than one big tech company has assigned me an ‘account manager’ who insists on telephoning me to ‘catch up’ or to ‘discuss how I might use the service better’. Not when I want to talk to them, but when they decide to phone me. I’ve threatened one such company that if they ever phone me again I’ll stop working with them.

(Obviously its insanely crazy for an INTERNET company to decide that they should talk to their customers by phone rather than…I dunno, maybe email? a far superior asynchronous means of communication that comes with free perfect logging of all information… but I digress…)

Much more annoying than this weird phone fetish that these companies occasionally have is when they decide the best way to deal with customer support is not to have any, or at best, to deal with it at the end of a two hundred step process of making people go through menus and drop down lists. I’ve just been trying to communicate to one such company about a problem they have, which they assume is mine (but is not), and there is literally no way to email them. None. nada. I have gone through the endless drop down lists for the ‘frequently asked questions’ about my problem, but it isn’t there. And like many of these genius companies, they have firmly refused to have a ‘my problem isn’t listed here, please contact me’ option.

Odf course its absolutely hilariously when companies like this have some major bug or website glitch causing mayhem, but nobody has any way to tell them about it. Pure Schadenfreude. I could reply to one of the many emails I get from them DEMANDING that I sign the updated 45 page legal agreement that changes every week, but obviously thats from one of those lovely ‘donotreply’ email addresses…

What I don’t get is the reasoning behind all this. If these tech companies were operating on tiny profit margins and had no money, and desperately needed to cut costs and run slimmed down operations…then sure. But these companies are often making billions, or tens of billions of dollars every year. Hiring some staff to reply to emails is NOT expensive, it really isn’t. And even hiring high quality staff, sending them on dedicated raining courses about the companies products, and giving them decent employee perks and bonuses and so on…it really isn’t going to break the bank for these guys. (They do not do this. I’ve never spoken to anyone at google who knows how their systems work even half as well as I do, a casual user…).

And yet instead…they sit on vast piles of cash so huge that it defies calculation, money that they neither return to stockholders or invest in new ventures. Its like they are trying to pretend that the money does not exist and that the *worst possible thing* they could do with that money is to give people jobs doing something their customers would appreciate.

I just do not get it.

So….it always bugs me, when I live in this glorious 2560 res world of mine, when I visit a website that has this tiny thin little column of ‘site’ in the middle and then…blankness. I get it, designing a website that scales in the x axis is a pain. and yet…

I have managed it, and recently tweaked it a bit more. Here is the positech.co.uk website at low res: 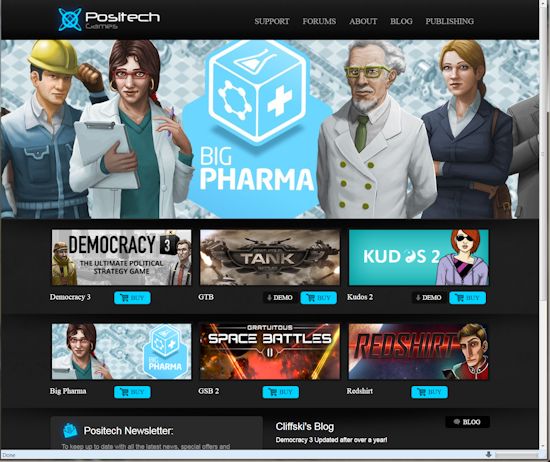 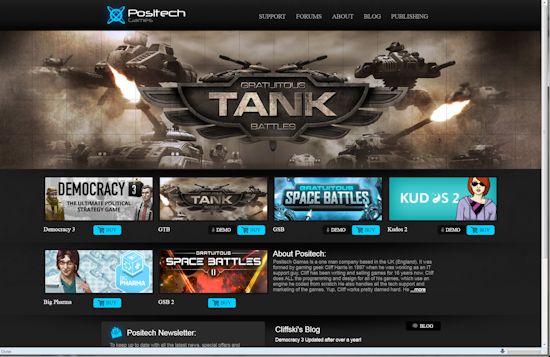 …and at big big res: (oooh even more) 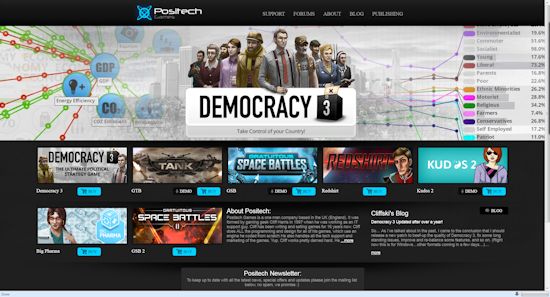 Basically I don’t want people to have to scroll when they don’t have to, and if the visitor is staring at the screen I want it full of screenshots and logos for all of my games. Hey, people still buy Kudos 2 in non trivial numbers, kinda :D

Plus I need to have a site that supports more games as positech gradually (like a snail carrying heavy shopping) expands… By the Summer of 2016, I hope to add Shadowhand to this site, PLUS another game that I have not announced yet, PLUS maybe be teasing yet another game that…I haven’t announced yet. Strength through diversity and all that kind of thing. Plus who knows, I may finally get some crazy VR thing working and put that up there :D.