Positech has been around a long time. I am OLD. I remember before VHS. I remember before CD’s. i was there when Sauron was defeated and men were shown to be weak. As a result, I’ve had a website for a long time, and probably due to mere inertia, it’s got a lot of SEO from inbound links, and a lot of (my) games on it, and therefore, it acts as quite a good funnel for traffic and sales. I’ve also advertised a lot over the years and pointed at it, so that has boosted traffic too.

Lets look at some numbers.

In the last year, my direct sales have been $170,000. That actually surprises me. I thought it was less than that. Not bad for an indie website in these days of ‘everybody buys on steam’. If I look at web traffic I get these stats over the last 365 days: 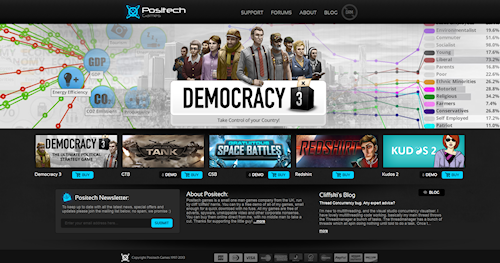 That seems pretty good to me. Maybe some of that is my games checking for updates? If I check google analytics, the site got 1.8 million visits. 417k were from organic search. That’s a decent figure. I’d love to know how it compares with other indies sites, and smaller portal/bundle sites. I should also state these figures ignore redshirts site and the gratuitous tank battles site, both of which have their own base domains.

What this has got me thinking is that in effect, I own a mini-portal. I’d wager indies get a fair few emails along the lines of ‘We are an exciting new game store and we would like to grab 30% of your revenue despite having virtually no traffic, if you agree to sell through us!’. I know I do, and I wonder if those sites have less traffic than me. I have signed deals in the past that have earned under $10k a year in sales through a channel, even under $5k. 5% of my direct sales is more than that. You can probably see where I’m going with this?

I have zero time and mental bandwidth, but I do muse over the idea of saying to indies who refuse to sell direct because ‘it’s too much hassle’ something along the lines of ‘I’ll do it for you, and take 15%’. This is just an idle thought, and I’d have to be very impressed with a game I’d add to my own site. But it is worth a thought.

I have been slowly investing in my site over the year. Check out the forums. They now support facebook, google and twitter as logins, and the individual forums have custom graphics. ooh!