Positech Games is building a school in Africa

I tweeted about this, but here are more details. Basically, Positech has had some pretty successful years, and we thought it would be cool to make a decent charitable donation and ‘do something good’ in the world. I’ve always been a fan of the idea of sending charity where its needed, dispassionately, rather than supporting a charity because an issue has directly affected you, or its local to you. I’m sure the nearest school to me would welcome a charitable donation, but regardless how ‘struggling’ such a school would be, it will have a proper floor, walls, windows, running water, and chairs for people to sit on. Not so everywhere.

Which brings me to the charity ‘Building Schools for Africa‘. I found them by googling, frankly, and after some digging and investigating, decided they were ideal. What I like about it, is that you don’t just send ‘some money’ into a general pot. You can actually pay for a whole school, the whole shebang, and its like ‘your’ project. In this case, the local community supply some manual labour, and I think they bake the bricks, and all the design, carpentry, construction and technical stuff gets paid for by the sponsor. In this case Me/Positech.

The school in question will be in the village of Mbalengue  in the East Region of Cameroon. The current school illustrates exactly how much they need a decent one: 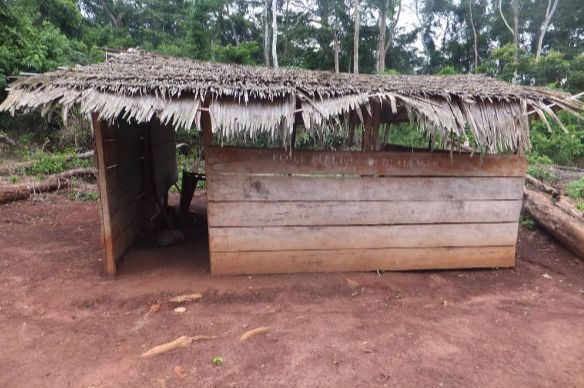 The village has 250 people, (the school will also cater to two nearby villages), and has no clean water and no electricity. To quote the report on the current school: “5 benches in the school. Children sit five per bench and it still not enough, others sit on sticks”. The ‘blackboard’ is just a bit of wood they draw on.

What appeals to me about this sort of project is that your money goes really, really far. The plan is for this school to have 3 new classrooms, an office , 3 tables, 27 benches, drinking water, and a proper toilet. The contrast between what they will have, and their current school is massive. And doing this cost notably less than my last car.  This will, to quote the study again “Promote and provide basic education to an anticipated population of 150 poor peasant Students, thus enabling the Students and their families a brighter and more equitable future.”

Thats something I can say ‘I did’. I’m extremely proud of the game design of Democracy 3, and the graphics engine of Gratuitous Space Battles 2. I’m also proud I taught quite a few people their first steps on the guitar when I was younger, but lets be honest its all just trivia compared to helping 150 kids education. And thats 150 at any one time. This school will be around for ages. 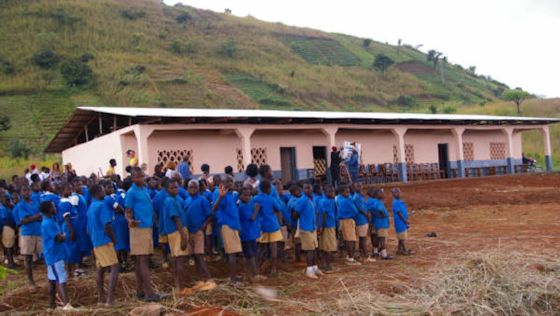 Anyway…it will take ages to get the school built, but the charity already blogged about it, so I think its fine to at least announce it now. Eventually I’ll get pictures of the school under construction and I’ll share those here too. I’ve never been to Africa, let alone Cameroon, and as I don’t fly much, I probably never will, so seeing pictures & video will be as close as I get. I’m definitely going to frame a picture of the finished school on my office wall though.

Anyway, I don’t want to come over all ‘I do a lot of work for charity mate, but I don’t like to talk about it‘. I’m blogging it mostly because if people in a similar position to me are considering something similar, I thought it would be helpful to post about my own experience. Building a school like this costs about £18k. I’ve no idea if you get any tax benefits for doing so, YMMV.

Gratuitous Space Battles 2 gets its campaign…

We just rolled out a nice l33t update to Gratuitous Space Battles 2 that fixes a few things, tweaks a few things and also OMG adds a new campaign mode. It meant changing some menu stuff around, but its all explained below in this video. This MASSIVELY changes how you play (if you choose to play the campaign) because you have to be thinking several battles ahead, and suddenly ships are no longer expendable. I hope people like it, and I hope people realize how easy it is to mod (more on that later…)…

For those who have been on another planet…I should point out that Gratuitous Space Battles 2 is very much on sale now from us direct, and also from steam, from gog and the humble store. Go grab a copy and start blowing the galaxy to bits.

So…I’m declaring July 2015 as Democracy 3 advertising surge month, to see if it boosts income from the game over the next 3 months or so. I don’t think you can judge these things purely on an immediate click-through basis.

So… to test this I’m throwing roughly $34k at democracy ads between now and the end of July. There are various targets for this, not least reddit, facebook & twitter. Some adwords stuff, some project wonderful web-comics, and some specific sites such as NewsWeek and PvPOnline. PvpOnline have done a cool thing where they added characters from the cartoon into my ads for the site: 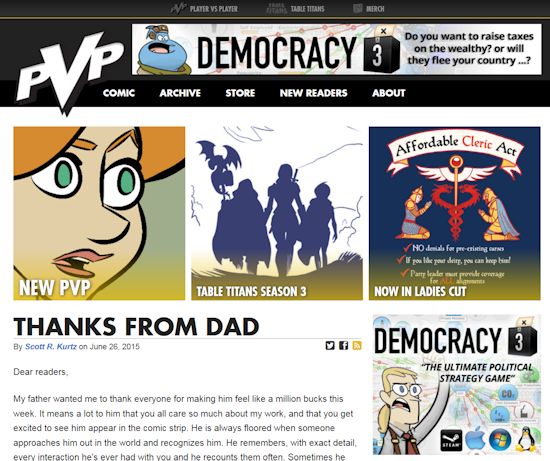 Sadly you wont see Democracy 3 ads this month on SomethingAwful, The Onion or CivFanatics because none of those 3 replied to my emails. I spend that money on wine instead. C’est La Vie.

At the end of the month I’ll have lots of juicy stats, plus I’ll do another update after two more months with my analysis of what effect I judge it to have had, which will likely have a large margin of error. Fun fun fun.

I have updates in my inbox on various secret positech projects. More details to come over the next few months, with any luck.