Formation orders in GSB sucked a bit. You had to select a ship, then a target and basically the order was ‘stay at this position relative to that ship’. This sucks in two different ways. Firstly, it means if the ‘target’ ship gets destroyed, the formation is instantly abandoned (yikes). Secondly, it is laborious to set up 32 ships into a formation.

The new system for GSB2 is simpler. You group select a bunch of ships and then add a formation order in one go. They then attempt to stay relative to each other, regardless who gets destroyed. Internally, the ships ‘elect’ a command ship, that has ‘free-will’ and the other ships will try to stay in relative position to that ship. That ship getting destroyed or tractored results in a new election. So far so good, and certainly better when it comes to ship destruction and setting-up GUI. However, it leads me to question a few things. Take this formation (coder art!) 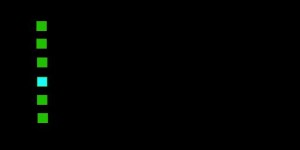 Just a simple line of 6 ships where randomly I’ve made the blue one the commander. If the commander heads to the right, then all is well. However, if he heads at an angle what do the ships do? Should they stay relative to the ship in absolute world terms, or in relative to the lead ships-angle terms? in other words, do we wheel? 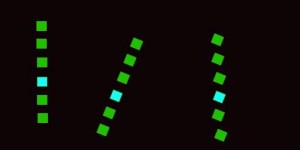 Obviously the two different behaviors are vastly different. It also brings up the topic of what to do if the command ship decides to retreat when damaged, does the formation follow? what if it’s just 1 damaged frigate… I’#m guessing they leave the formation at this point. In my mind, the reason behind formations is to keep ships trogether in the sense that they should be able to cover each other in terms of support, and shooting down incoming missiles etc. With that in mind, I reckon it would make sense to always elect the biggest ship as the commander, where viable.  Theoretically you could have a super-slow ship with the entire fleet locked into formation with it, effectively preventing anyone from moving.

What do you think? do I ignore angles and stick to world space, or pivot? and will the system of commander elections work ok? For reference, this is how fighter squadrons already work in GSB 1.