Getting heard about when you are a small PC developer is a nightmare. Many websites are console only, some cover just a few ‘Triple A’ pc games, and most of them have the attitude that it’s their job to cover the games their readers are currently interested in. That might sounds reasonable, but let me re-phrase it.

“It’s their job to cover games their readers already know about.”

What’s the point in that? I don’t turn on BBC news to hear what I already know. That’s not the point. I expect there to be journalists out there finding interesting stuff I need to know, or may be interested in. I buy PC magazines that I like the style of, i don’t go in a shop and see a certain game on the cover and think “I’ll buy that one”. Why would I? if I already know about the game, I can just google for the developers site and read everything about it msyelf. I need games coverage to tell me about the games I do NOT know about.

I wish more gaming news sites, blogs, forums and magazines actually did what they used to call ‘investigative journalism‘. That means scouring the web, asking around and seeing what’s new and what’s cool. Running emailed rpess releases through a spell-checker and then sticking them on the front page is *not* journalism, it’s just working for the extended PR dept of EA/Activision.

I’m sure Kudos 2 has a big audience if people hear about it, but the web is becoming so corporate that unless your new indie game is on the front page of bigfishgames, it flies totally under the radar. If you know any gaming sites that might cover the game, do me a big favour, and email the editors and tell them about it. It’s always best to hear about new games from a gamer, not the developer.

And if anyone hangs out on a forum with a graphical sig, and wants to stick this in their sig, even for a few days, that would be awesome.

I really appreciate any help people can provide in getting the word out about the new game.

A lot of people ask me why my games aren’t on Steam. I always reply with “why not buy them direct” or “valve don’t reply to me”, both of which are true.

Because steam is so popular, I AM missing out on a lot of people getting to know about my games, and I still would love to have my games on there. So I was pleased to be added to the ‘get our games on steam’ petition that mode7 games (of determinance fame) recently started.

The petition is here. If you have a spare 5 minutes, please sign it. Indie devs need all the support we can get. My eyes water when I look at how much most advertising companies charge to promote my games, so getting on steam is one way I can get in front of lots of gamers without needing the megabucks that the big established companies like EA have.

And please tell other people about the petition!

No.. not kudos 2 (you can BUY IT HERE though :D), but a game called DETERMINANCE.

Us indie game developers are friendly people. We occasionally meet up to eat pizza and grumble about big games companies, publishers and the fact that we can only afford to eat pizza. And in-between all that we occasionally get chatting about each others games…

Have you ever wondered how cool it would be if there was a game where you could do sword fighting by moving the mouse around rather than clicking the ‘sword fight’ button? So have I……..So let me ask you this… Have you ever tried this game: 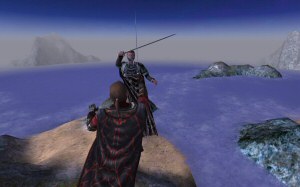 Its called ‘Determinance’ and it’s made by fellow UK indies ‘Mode7 Games’. here is the website where you can download the demo:

And if you try the demo and want a completely FREE copy. Just email me at cliff@positech.co.uk and ask for a code that will unlock it. I have twenty to give away. Will they go in five minutes or five days? YOU DECIDE!

Ok it isn’t a real URL, but I bet someone will buy it soon. An I can guess what they will do. here is my prediction:

1) They will sign up to one of the affiliate programs for the big casual games portals.

2) They will sell every game every other site sells. There will be nothing exclusive or special in terms of content

3) They will not sell many copies or make much money

4) They will try and convey the impression that the site reviews new games and is a news site about new games, but in reality it will only cover games that it can sell on commission

6) Their own game will not sell well.

7) They will spend nothing on advertising, have no long term plan, no marketing budget and no idea what to do next.

Just my guess. I see this happen again and again. i don’t get why people don’t realise it’s not a path to instant riches.

– The ferengi rules of acquisition

Think of the four people you know best you are of working age. write down their names now.

I suspect that a LOT of them work for those big companies, and it’s a possibility you work for one too. I used to. In fact I worked for a company with 66,000 staff once. Big companies are every effective, they can do things small companies can’t, but as we see more and more mergers and takeovers (especially in finance) I think we are seeing the downside of the big company society.

Whenever I read a new story about games companies releasing an expansion pack, downloadable content, micro-transactions, advertising or anything like that, someone always mentions ‘greed‘. News stories about games companies are often ‘tagged as ‘greed‘. Now I’m not going to defend some of the corporate bullshit we see in this industry, but I’m wary of this growing trend to equate all companies and everything they do with ‘greed‘.

In a sense, greed is being redefined as any move designed to make money. This is mad. Making money is what companies do. Cliff Harris is a game designer who loves making games, but Positech Games is a company that exists to make money. If Positech fails, Cliff can’t make the games. OF COURSE Positech tries to make money.

The reason that i think a lot of people are equating all business, all sales techniques, and all companies as greedy, is that increasingly people have no contact with people who own and run companies. The owners are seen as faceless ‘shareholders’ who are often assumed to be millionaires in flash houses. (The vast majority of shares are held by pension funds held by ordinary people) People assume that there is a justifiable ‘them and us’ mentality between the ordinary folk (us) and the evil swine who own companies or (Shock horror!) copyrights.

Small businesses act as a buffer between the excesses of the evil mega-corps and the general population. Big businesses can’t be *too* evil or the small ones will get a competitive advantage by being nicer. EA can only go so far with DRM before Positech and Stardock make them look like gits. Big business can lead to monopoly and a lack of choice and price competition too. Small businesses serve those niches that the big boys can’t be bothered with. Even if you only buy food from WalMart and games from EA, *You* benefit from the existence of Positech, Stardock and Introversion. We are the guys keeping the big guys (relatively) honest. Nobody knows where the next google or facebook is coming from, and this keeps those big guys in tune with the market, and not totally driving the consumer nuts.

Lets hear it for the little guys, and lets try and remember that not all companies are evil, not all adverts are the spawn of satan, not all games prices or expansion packs or DLC is some evil greedy capitalist scheme. At the end of the day, everyone is just trying to pay the bills. Sometimes, if it seems like I’m just trying to sell you something, it’s because I am. That’s what I do to put food on the table. It doesn’t mean I don’t love what I do, or try and do it well.