Another video from Jake talking about the enemies abilities to use consumables in Duel sections of ShadowHand. I’m really looking forward to playing the finished version of this. Its getting closer to release!

I’m keen to get people playing a really early build of my next game: Production Line. My current aim is for it to be available for pre-orders and early alpha play in about two weeks time. This is MUCH earlier than I normally start taking money for a game, and letting people play it, but this as an experiment for me, and I’m always looking to try new stuff. The more I think about ‘Early Access’ for a game like this, the more I like it as a developer. I suspect I’m a much better programmer and ‘big picture’ designer than a designer of the nitty gritty mechanics of a game, and for someone like that, early feedback from real players will be invaluable. Here is my current plan:

The next two weeks: Get a playable Alpha.

The game is playable right now, and you can easily spend a few hours playing it without issues, or running out of things to do. The game is English-only, windows-only, and is missing the following:

There will also be a lot of awful balance issues, and of course some hidden bugs you can enjoy finding. Yay!. My big internal debate right now is how much to charge people ordering at this stage, more on that next week. This is likely to be a direct-download from-the-developer only affair in the short term. Anyway beyond that… 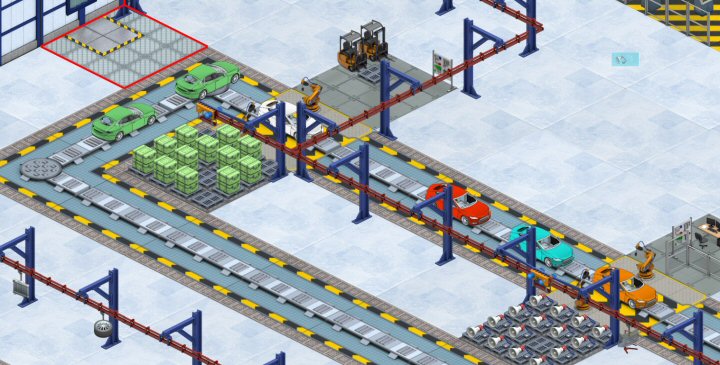 The month of February: Play Balance

Everything will be thrown into chaos once the player base goes from just me, to the 100 or so people mad enough to pre-order at this stage. (I plan no press release or ads, just a blog and twitter/facebook announcement. I don’t want to make a big deal out of it). I suspect I will be inundated by people saying ‘Windows are too cheap!’ ‘Employees don’t cost enough!’ ‘Aircon is a worthless upgrade’ and so on… Sorting through all that and making the game a balanced, playable experience for everyone is going to take a lot of analysis and fiddling so I expect that this, combined with GDC at the end of Feb, and also Shadowhand‘s launch, will mean February will be likely ‘feature-free’ in update terms.

At this point I’ll likely want to gather opinions on, and suggestions for, the two big missing areas of the game, marketing & QA. The cars currently are assumed to have neither, and the whole topic is ignored, but introducing them both will be fun, and involve new research, new graphics, and a whole lot more GUI. This is just to get stuff into a vaguely playable state and make sense of the mechanics. Marketing is obviously something I am personally interested in, but I’d like to know the extent to which players of the game find that it will add to the experience.

April and beyond: Features and polish.

Music, SFX, a decent GUI design, and a whole lot more features are all planned, but I intend to ask whatever community I can build up to give me their priorities in terms of what I work on. Some people may be interested in more employee management, others in variants of car designs, maybe some in an even bigger tech tree, or more complex market mechanics, it could go in a number of different directions from here.

If all goes well, I might take a step towards putting the game on steam for early access later in the year. I can’t guarantee that, and never intend to make any promises about the future, but I also cannot foresee any problems. Until then, it will be direct sales only, so I can keep control on things, and not have to divide my time between my blog & forum and steam and so on. Also it can be a bit of a megaphone effect when you launch on steam, even in Early Access, so I’d rather reserve any press coverage I may be lucky to get until after all those early issues have been wrangled along with help from the early-players.

Beyond that… who knows! The game may prove a success or a flop, and that largely determines what happens. I’m loving working on it, so I can’t see me stopping work on it for ages, even if nobody buys a copy :D If you want to know more about the game we have a website here, and also a bunch of youtube playthroughs here. Let me know what you think.

A mixed bag of stuff this week. I’m crunching away boih at bugs, and balance issues, which make for a poor video, but also luckily we now have lot-expansion plus some zoom-out UI shininess to look at, plus I fire up nvidia nsight to give you a quick preview of how a frame gets rendered in the game. (FWIW I use my own engine, based on directx9 which means I need to worry about draw calls when changing textures. One day I’ll switch to a newer directx version, but I feel no pressing urge to do so yet :D.

Yup…we are still publishing Shadowhand…the puzzle/rpg/visual novel mash up game by Grey Alien games. You can read the latest blog post from the team here:

And also there is a new video update showing some of the new characters:

The press probably don’t care about your game. That might be ok.

There are a lot of indie games being released these days, hell, a lot of games full stop. There is evidence of this from this wonderful graph courtesy of steamspys twitter account: 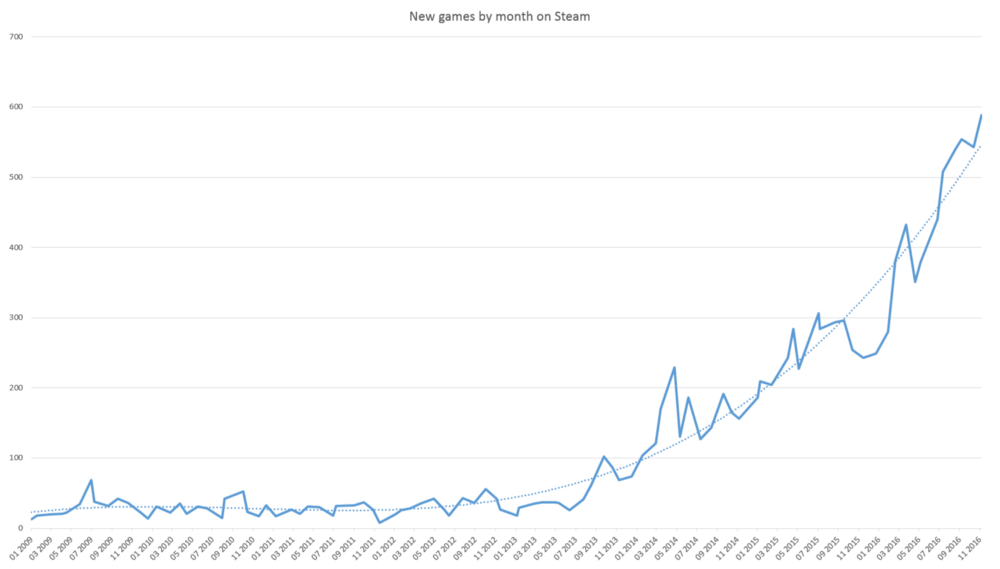 Its hard to imagine the number of gamers has increased to the same extent, or the amount of games press covering indie games, so the inevitable conclusion is that chances of the press caring about your indie game are less than 1/6th as high as they were when I released Democracy 3. In short…in terms of getting press about your game, you are kinda fucked.

And not just you. I haven’t been able to set the world of gaming media on fire with Political Animals or Shadowhand or Production Line either. If it makes you feel better…its me as well. In terms of getting press, I’m probably only slightly less fucked than the average reader of this blog (assuming you are a developer obv.).

The good news is, I don’t think this really matters. These days, I increasingly hear about a new game from world of mouth, a reddit/forum post, twitter or facebook. Or I see it on my steam front page. None of these are areas where the press is dramatically driving eyeballs. The idea that all discussion about video games is emanating like a funnel from the core seed that is planted by a number of gaming websites and print magazines is rooted in the 1990s and 2000s, not today. I actually think that if the editors of Kotaku, Rock Paper Shotgun, PCGamesN and PCGamer all HATED YOU with a vengeance, and refused to ever mention your game, its not really going to have much effect, because the percentage of the games-discussion taking place online that is controlled  by a few media people with megaphones is actually pretty small, and my gut feeling is that it is shrinking.

So how do you fight that?

You don’t, you embrace it.

The fact is, gamers like to find, play and talk about cool stuff. Despite us complaining that only 1% of steam players leave reviews, thats still hundreds of thousands of reviews, and tens or hundreds of thousands of comments, retweets, likes, upvotes and all the other social media stuff. I have to admit, given the option of a front page article on a news site about production Line, or having the game discussed in a top-voted subreddit by hundreds of redditors…I may well choose the reddit option. Social media gets a bad rap, and sure its a cesspool of trolls and people referring to each other as Hitler, but in amongst it all there are a lot of people talking about games, and these people BUY the games, they aren’t the ones getting free press passes.

I, like everyone in any branch of the entertainment industry, have absolutely no idea what I’m doing. Sometimes I’m right, sometimes I’m, wrong, but I like to think I make informed decisions. In a day when googling for almost any topic or question will get you video results near the top of the list, its hilarious that so many once proud gaming websites don’t even have a video channel. The same people who laughed at their bosses not understanding the shift from print to web are missing the shift from web to video. I strongly think that a constantly updated and topical video channel is not just an option for the fully staffed indie studio with a full time community manager, its absolutely essential.

I’ve done 11 blog videos to promote Production Line, and done my best to respond helpfully to all the comments on them. I fully intend to blog every week in video form until final release and then beyond. I may prefer text to video, but many of my customers do not, and they are the ones in charge. I’m no longer releasing videos as a way to persuade the ‘big press’ to run a story with the video link, the video IS my story, and it IS my coverage, and I’m fine with it.

Right now my videos average about 600 views each, hopefully this climbs over time. If the game looks good, people will share the videos and tell their friends. I am not trying to rush this, or be too pushy about encouraging it, I’m hoping to just make a great game and let it gather attention organically for now. I’m not saying i wont advertise at some point, I’m just saying that chasing the conventional press is starting to feel to me like perhaps a bit of a dated strategy.