Nothing in life is perfect. Not even sheldon cooper. So it’s always worth taking a fresh look at stuff you have made and trying to tear it to piece and criticise the hell out of it. Fortunately, the internet is full of people, ‘professional’ or amateur who will tell you your game sucks, but often not in especially helpful ways, so I’m trying to tear my own game to shreds and find everything I can to criticise and improve. So I present to you my initial thoughts on everything that is rubbish about the GTB interface for battles (and obviously this acts as a todo list for the next patch…) Click the image below to enlarge 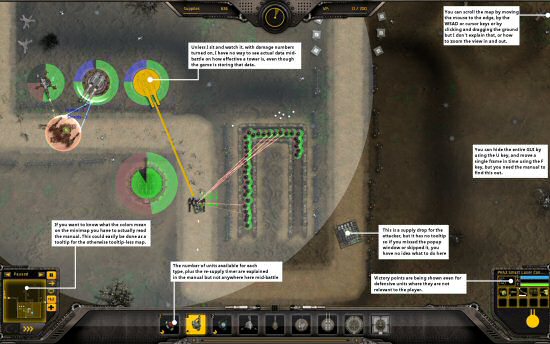 Let me know if you think of other stuff in the battle GUI (or any part of the game) that is unclear, confusing, or could be improved.

I’m still working on the game, obviously. I’ll be analyzing what balance changes need making, and hopefully tweaking a few other minor things that bug me. Textures that don’t tile well, particle effects that could be better, and so on.

The only outstanding bugs I’m aware of relate to steam integration, and hopefully I’m narrowing in on suqashing them for everyone.

I’ve been looking a bit at the steam in-game purchasing for stuff like expansion packs (if there will be any) but it looks a bit complex for a one-man band like me to implement.

I think I’m bumping up against the limits of what a one-man company can do, and may have to choose my battles more wisely in terms of where I compete. I have a new version of GSB ipad sat in front of me waiting for testing, plus some redshirt stuff to check up on, and of course there is always showmethegames.

How I found time for archery yesterday is a mystery :D

So if you have been on the fence so far you now have no excuses soldier! Go grab the Gratuitous Tank Battles Demo from here
Tell your friends!

This is much better explained through video so here goes…

Ok, I admit it, I wanted an excuse to type war inside my head. But there really is one.

There is half of me that looks at the games industry, and Positech, and Gratuitous Tank Battles, and reads books on how big big companies (google, amazon etc) got where they are, and thinks:

“We are literally INSANE if we aren’t taking at the very least a third of our profits and throwing them madly into expanding the business by way of advertising spending, promotional activities (conference appearances and promo stands etc), stuff like T-shirts and posters and hiring a proper PR agent to grow the public awareness of the company,

The other half of me thinks:

“Those ads are not converting at a rate that makes any economic sense. It’s money burned. Plus this partnership with X or Y is not as profitable as if I did it myself, plus I can do all my own PR, plus we live in turbulent economic times. If we have $X in the bank, we should definitely leave it there, as an insurance policy against having a really bad year. better safe than sorry”.

It’s a constant battle, which means that my google adwords budget can swing madly from £150 a day (first half of brain is victorious) to zero (second half is winning).

My pet theory is that a lot of entrepreneurs I admire (Jeff Bezos, Duncan Bannatyne) just don’t have the second part of the brain at all. They see no downside, no need for caution, no possibility of failure, and never consider the companies money to be for anything other than growing the company.

Maybe that last sentence is the true key. is positech’s income mine? In a legal and practical sense, it is. But should I stop thinking that it is, and think of it as positech’s? Maybe if I did, I’d be free-er with promotional stuff, and spending in general. I could tell you amusing, fairly embarrassing tales of the stuff I’ve done on my own (badly) because I was too cautious to pay what amounts to quite small amounts of money to get other people to do it.

I may experiment with the idea of thinking that positech and me are different things. Ommmmmmmmmmm……