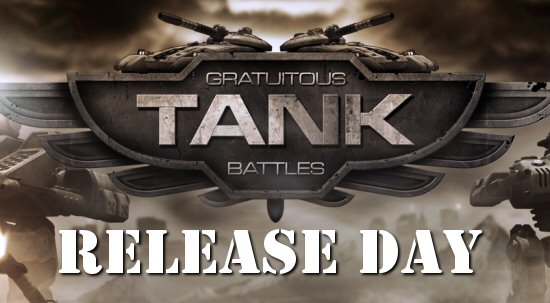 Yes it’s that day at last! Hurrah! Grab your tommy gun and climb out of that trench because it’s time to take the battle to the enemy and go grab yourself a copy of Gratuitous Tank Battles.

You can buy GTB direct from the developer (me!) here, or from…

If you buy direct, you will find details on how to grab your free steam code in the purchase email. If you pre-ordered and thus already have your copy, I’ll be emailing you details about grabbing your steam code. If you know a friend who wants the game, you can get a second copy direct at 50% off.

Even though the game is now officially released, there will be updates, patches and improvements. I’m already working my way through tests of the first post-release patch, which concentrates on mod support for the game. I want the mod support to be ‘at least’ as good as the Gratuitous Space Battles modding, which was incredibly popular.

If you took part in the beta, you will notice today marks the release of the 1.008 patch, which is the first full release build of the game. The game can take up to 24 hours to trigger an update check and grab the latest version, but the differences between 1.007 and 1.008 are not huge.

To any hugely influential games journalists who have been holding off on covering the game until release date, please contact me at cliff@positech.co.uk.

And anyone who can find space in their hearts to tweet, blog or facebook like or other trendy social things, to ensure a few more people out there know about the game, it is all very much appreciated. Thankyou!