I have a vaguely usable hacked together damage editor which means I can make a few improvements to the ships now. I’ve only done 1 so far, but with the tools in place the rest shouldn’t take more than a day. Here is a screenshot showing a federation cruiser and the changes: 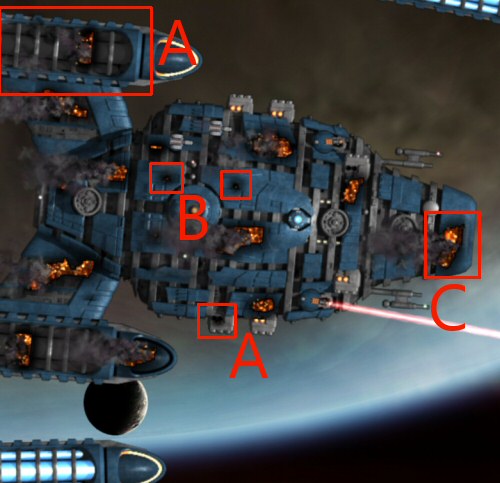 A) This shows that some damage has knocked out the lighting on the warp nacelle. This is actually just visual and does not correspond to engine damage, that would be a nightmare, but it still looks better than them staying on :D Also, two of the tiny orange lights have been knocked out by another hit (bottom A)

B) These tiny impact ‘scars’ are new. By having a lot of these scattered around the ship, the targets selected by enemy ships seem less predictable and more random, although they are pre-assigned in truth, and then scrambled in order.

C) My editor lets me easily add ‘permanent’ smoke or spark effects to each damage texture, so they don’t seem too similar. Most major impacts result in a complex smoke and flames emitter anyway, but only some of those smoke effects stay around for the lifetime of the ship.

This screenshot was taken using my debugging hacks, so it’s not really representative. Normally a ship hit this much would be flying through a lot of debris and maybe hulks from other ships, so it would look a bit better :D