I’m 7 days away from releasing my new game, and the list of stuff to do is a bit grim. I keep making silly mistakes, like giving people the wrong version of files, and then doing it again,

It’s like crunch time, but being the only person who has to do everything. Arggghhhhhhhhhhhhhhhh

If you look at a publishing contract, there are pages and pages of legalese bullshit. 99% of it is the same crap you get in all of them, which 99% of the time is totally irrelevant in practice. it has to be there, so both sides are happy but it’s not a practical problem.

This is stuff such as “you didn’t rip this game off anyone else” and “we have right to use name of the game to market the game” etc. Unless you are dealing with satan, a lot of games publishing contracts for on-line are very similar.

And then there is the vital stuff such as:

What royalty you get per copy sold

What the deductions can be

When you get paid.

Those 3 lines pretty much sum up the haggling of games contracts. It matters a BIG DEAL how much royalty you get. Some websites reckon they are doing you a favour to offer you 40% (yeah right, fuck off, I don’t need you, but you need games). Some pay a lot more, some pay a huge amount.  Some have a nebulous definition of deductions. And many of them assume you will take whatever is offered (think again).

I’m about to contact a few on-line portals to sell Kudos 2 through, alongside my own site. Of course, I REALLY want people to buy the game direct, because I make the biggest cut that way, but some people are so used to buying from certain other sites it’s tough to tempt them away. Generally, I make about 50/50 from my site and from everyone else. If it started skewing too far towards other people, I’d panic. I want to earn money to pay MY rent, not everyone else’s.

Here’s a last reminder for anyone who hasn’t heard it before:

All game designers are blind. Every single one of us. Peter Molyneux, Will Wright, Sid Meier, even little old me. We are all massively totally hugely blind.

It’s inevitable.  That game you enjoy and play a few hours each week, we spent at least a year staring at it EVERY DAY. We possibly sat in three hour meetings about the inventory screen and whether it should be done another way. If we did any serious play-testing, we saw the “you have been attacked by a cave troll” window about 500 times. It’s not news to us, it’s just like the furniture. No big deal.

When I used to work in city server rooms, I ended up totally blind to the security, and the cabling. City server rooms are so security concious its laughable. One room even weighed you on the way in and the way out to check you didn’t swipe anything (or leave anything in there). Many of them had CCTV pointing at you at every stage of the torturous trip in and out (swipe cards, pin entry, physical keys all combined). After a while, you ignore it. Most server rooms have so many cables running from computer to computer that it all gets put under the floor, and round the back of some of the racks is an exercise in cable tangle hell. After a while you ignore it.

The problem with being a small team or lone game designer, is you ignore those really obvious faults, inconsistencies, confusions, bugs and irritations, not because you don’t care, but because you cannot see them. Most US game designers don’t realise all the elves have mid-west accents. Nobody thinks their accent sounds weird, but it always does, to other people. Cockney elves may sound amusing, but to a cockney, a mid-west elf is just as silly.

I’m sure I’m making the same mistake with my new game, but I’m doing what I can to avoid it. Different people, of different ages, genders and nationalities are giving it a try. They always spot things I never would have, because I’m blind to them. If you are making a game on your own, you are also blind to your mistakes. Get someone else to take a look, and listen to what they have to say.

If you run Vista home premium and have never taken the time to strip it down to its basics, or done any un-installing of the crap that some PC makers pre-install, you *might* be having stability or performance issues. Vista is NOT a horribly slow and bloated O/S, or at least not as bad as people claim, but it can easily get cluttered. If you run task manager (right click the bar at the bottom of the screen and select it) you should see something like this: 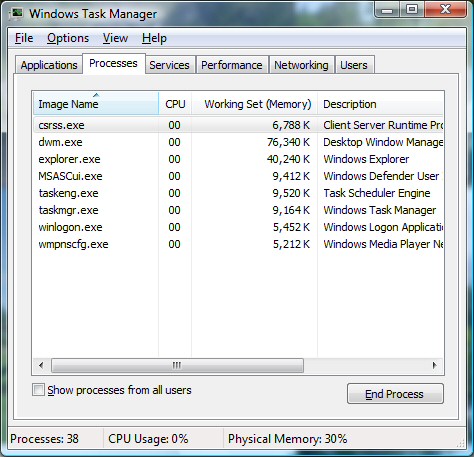 If your list of running processes is bigger than that, you are running stuff you do not need. You might run it anyway (I run msn and the sidebar normally) but most people have junk running that achieves nothing but instability. I don’t like itunes thinking it deserves a permenant position in my memory, same with quicktime, the BBC iPlayer etc.

I thought this might be helpful for people looking at a list of 34 processes, and thinking “These must be essential”. They aren’t :D

I wrote a new article for bit-tech, you can see it here (courtesy of digg)

It’s about how sandbox games are getting less sandboxy, with a lot more in the way of aggressive hinting and quests to tell you what to do. I consider this to be a slight dumbing down of otherwise good freeform games. I don’t play games to be told what to do, I could get that in a day-job :D

I got thinking today about spore, my slight disappointment with it, and thinking about whether it’s a genre I could tackle in the future. I certainly think the game is too simple and dumbed down, no doubt to appeal to the mass market. The section of the game I enjoy most is the creature stage, but it’s far too predictable, and simplistic. There really isn’t enough in the way of simulation complexity to give me enough of a freeform game there.

So I was wondering about whether I could do a different take on the ‘cell stage’, which is more of a ‘sim fish creature’ game that anything really cellular. I love the ‘look’ of that part of the game, but I thought the gameplay was too simple. There are basically two food types (meat and plants) and you avoid big things and eat little things. Also there are some bits of meteor you need to hoover up. I’m pretty sure there is huge scope to expand on all this and make a better game. It’s certainly the sort of game I enjoy coding, and it would fit nicely in with my general portfolio of stuff whilst being a new game (non sequel).