So kickstarter has raised a bazillion dollars for games. rejoice hurrah etc!

I have a love/hate relationship with the idea. On the one hand, it’s awesome to see indie devs get games made that they didn’t have the money to make otherwise, as the alternative (gradually building up over time) took me about ten years to get to the standard of games most people know me for. I’m all for people shortcutting that trudge.

And also, it’s great that established industry names that are being ignored by idiot publishers can appeal directly to the fans and get those games made, even if we STILL do not have TIE fighter 2….

On the other hand, it’s selling a dream, and a pretty unlikely and far-off dream at that. I can’t help but think of lots of great successful projects that I would NEVER have funded on kickstarter, and some crappy disappointing shovelware nonsense I would have funded.

I’d have funded cossacks II, then hated the direction they took it

I’d have funded star wars : supremacy but then hated that too…

No way would I have funded minecraft, or VVVVVV, and despite the huge popularity and evident finished quality of those games, very few people would have funded them based on just some concept art and a description. I’m sure a lot of people like to think they would have, but I doubt it. Games are hard to judge from concept art.

The problem is, that people do NOT know what they want. people want a better version of what they already have. in other words, they want sequels and remakes, and not truly innovative new stuff. That isn’t ACTUALLY what they want, but it’s what they think they do.

If I proposed 2 games on kickstarter, one was a totally new idea and mechanic, and the other was Democracy 3, Democracy 3 would get 95% of the votes and pledges. But does that really mean it’s the game that will sell the most? If I’d proposed Democracy 1 vs Starship Tycoon 2, Starship Tycoon 2 would have won out. And I’m pretty sure I could raise some kickstarter money for Gratuitous Dinosaur Battles.

But I won’t be doing it, for many reason,s but not least because I’m not sure that kickstarter pledges are that accurate a representation of what the public, in the long run, will really want to play.

The film ‘wanted‘ was on TV here again recently. I’ve seen it maybe 4 times now, and although it has lots of men shooting guns, for once it’s a film like that I really like, mostly because the actual gun bits are irrelevant. It’s a film about breaking out of a rut, in a job/relationship/life you hate, and becoming someone important and doing something you believe in. No wonder I love it.

For me, the highlight of the film is the last 10 seconds or so. To sum up, it’s a scene of the hero shooting the bad guy with a sniper rifle, but it’s SO much more than that.

I have no idea how the scene was written but I imagine it went like this. First, the writer decides that the hero shoots the bad guy (after distracting him) with a sniper rifle. Hurrah, a happy ending. Job done Ship the movie. It’s cool. 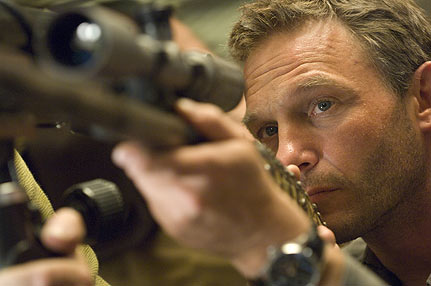 But then in re-examining it, the idea occurs to shoot the scene backwards, so we follow the bullet back to the gun. ++cool. Then, later, the idea occurs to do this in slow-mo with a voice talking over it. ++cool. Then the next day, thinking about the scene again, the idea for the decoy to be marked in post-it notes. ++… Then the idea for the bullet to go through the donut, then for it go through the drinks can, then for it to be a multi-part bullet, then for the sniper rifle to be huge. Then… the coup de grace, for the hero to break the fourth wall and deliver the last line to the audience. Genius.

You could have written the final scene in 2 minutes. To make it as good as it is probably took a LOT of passes. A lot of attempts to improve it. A lot of effort, a lot of time. I’ve never been confident enough to go to those kinds of lengths with my games. I think I probably should do.

(yeah I know that photo is from a different scene, couldn’t find the one I wanted :D)

Greenlight and the $100 fee

It amazes me that valve have got grief for requiring indie devs to pay a $100 fee to list a game on greenlight. I agree with their stance 100% and here is why:

1) They had a crap-submissions and spam problem. This solves it immediately. Nobody will pay $100 to submit half life 3 or a joke app. That instantly raises the attractiveness of the greenlight site to both gamers and legit developers.

2) The money goes to charity, they clearly aren’t doing this for commercial gain.

3) This asks whether the developers are actually serious about getting some sales of their game. Games with clearly zero sales potential, or half-assed efforts, or games that are of extremely low quality will no longer clutter up the system.

I’ll be honest with you, a huge chunk of indie games suck. The vast vast majority of every indie developers first games suck. My first game pretty much sucked. In fact it took me about five or six games before I made anything I can honestly say should even be considered for sale on steam.

One of the big criticisms I’m hearing is that indie developers do not have $100. I really doubt that. We are always told that indie developers are passionate, hard working, keen, driven, motivated gaming enthusiasts who love what they do. And yet they can’t find $100 to make that dream come true?
Lets assume you are a penniless indie developer that used entirely open source software to make your game, used free artwork, did all the work yourself, and you still have a commercial quality game that will sit alongside braid, frozen synapse and gratuitous space battles. But somehow you don’t have $100, and no way of getting it… really?
I’d sell something. I’d sell my mobile phone, I’d sell my TV. If I had to, I’d sell my flipping sofa. If I really thought my game would be popular on steam and sell well. Or I’d get a loan for $100. Or set up a kickstarter for it, or I’d take casual work on a building site for a week, or whatever else I could.
If it was $1,000 or $10,0000, I’d agree it’s a tough payment to get together for some indies. But $100? Really?

I had, I thought, pretty much decided what game I was going to do after I release my expansion pack for Gratuitous Tank Battles. it’s the third idea I had for a new game. And then, there I was watching a TV show which is (in some ways) relevant to one of my other ideas, and I was musing over doing that one instead, and then lo! believe it or not, a TV ad appears which reminded me of the other idea.
Nightmare.
One idea is a sequel. One is very marketable to geeks and gamers. One is a bit obscure and a bit indulgent, and very hard to explain or market to gamers.
None of them have any competition whatsoever.

It does amaze me the way so many people make really formulaic clone games. There are a whole lot of ideas that haven’t been used yet, and life is much easier from a marketing POV when there are not obvious competing games.

(Yes i refer to GTB as tower defense, but play it for 10 minutes and you will see how radically different it plays from other TD games. I probably make a mistake using the TD term to market the game…)